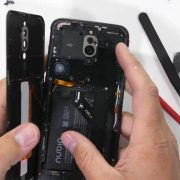 While all high-end phones are technically capable of playing even the most demanding mobile games but gaming phones have one or two things that set it apart. There is, of course, the RGB lighting that seems to almost be synonymous with any gaming device or accessory. There are, however, some like the nubia Red Magic 5G that boast of some innovative cooling system and, based on a teardown, the tiny fan inside is actually just one part of it.

It’s almost perplexing that some phone makers would actually put a fan, no matter how small, inside a smartphone. After all, more moving parts inside mean more chances of things breaking inside due to wear and tear and accidents. It also means that such phones will have to say goodbye to dust and waterproofing as the vents needed to make such a system work also invite the elements in.

It’s all to keep the phone cool and prevent the CPU from throttling, of course. The Red Magic 5G’s fan draws cool air from one side of the phone across a black thermal channel that lies on top of the motherboard and then out the other side. JerryRigEverything’s teardown, however, reveals that there more cooling tricks hiding inside.

Unfortunately, the Red Magic 5G is also not the most repairable phone in the market, not even close. The battery is heavily glued in place, hiding the display cables underneath. This means that any screen repair will automatically mean a battery replacement as well, making it unnecessarily more expensive.